Oil and gas development already is harming dozens of national park sites around the country. It could get much worse.

Just how many national park sites are affected by domestic oil and gas development? 12 have active oil and gas operations on privately owned lands inside their borders, and 30 more parks could follow. At least 68 coastal national parks could be harmed by an offshore drilling plan President Donald Trump’s administration submitted in the beginning of the year. Since the start of 2017, the Trump administration has proposed oil and gas leasing close to more than 18 national parks in the West. At least 14 proposed major pipelines are in the works across the country, and some of them could end up going through national park sites.

Oil and gas development in and around park lands can harm fragile ecosystems, fragment wildlife habitat, pollute air and water, interfere with viewsheds, degrade visitors’ experiences, and ultimately hurt the economies of local communities that rely on park tourism. Pipeline construction requires developers to permanently clear land, and pipes running through parks could explode or rupture, devastating the landscape and jeopardizing human health and safety. 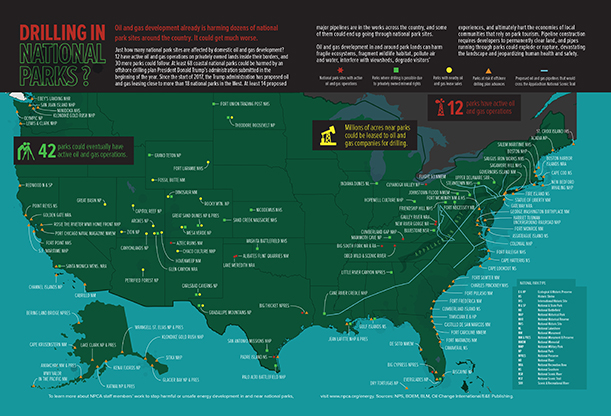 If you’re an outdoor enthusiast or weekend warrior, you’ve probably got a bunch of used gear in your garage that you hate to throw out. Ebay, Amazon, Craigslist, and even Nextdoor are all options… but they all have their drawbacks, too.

Enter father and son consignment shop owners from Charleston who thought there had to be an easier way — so they designed ReelTrail, a buying and selling website and app that also gives back to environmental causes. Ryan and Kirk Leaphart joins us on the Brandbuilders Podcast with The Dunstan Group!