We are pleased to announce the finalists in our Second Annual Fly Casting Competition hosted in-conjunction with Fly Fishers International (FFI).  Through the fly casting competition and the strategic partnership between PHWFF and FFI, we aim to bring fly fishing and it’s proven therapeutic elements to more disabled veterans who can benefit from it.

The competition was open to disabled veterans and disabled military service personnel actively participating with PHWFF Programs and was facilitated by our volunteer-run programs around the country.  PHWFF programs are divided up into geographic regions comprising over 200 programs nationwide that serve disabled veterans in their local communities.  The Fly Casting Competition began at the local program level where disabled veteran participants learn the skills and nuances of the fly cast from experienced volunteer anglers during regular program meetings.  For the competition, each PHWFF program selected a casting champion who proceeded to compete in their respective Regional Finals against fellow program champions. The winners and runner-ups of the Regional Competitions advance to compete in the PHWFF Casting Competition Finals during the Fly Fishers International Expo in Bozeman, Montana July 24 – 27, 2019.

A total of 27 PHWFF veteran participants will compete in the National Fly Casting Competition finals on July 24 – 27, 2019 and we are thrilled to introduce them to you below by Region:

The National Fly Casting Competition Finals will be judged by an esteemed panel of fly casting experts;

Following the competition, the disabled veteran participants will enjoy a special fly-casting demonstration from World Champion fly caster Maxine McCormick and her father, World Championship Bronze Medalist, Glenn McCormick.  At the age of 12, Maxine became the youngest adult division World Champion in sports history, outscoring every woman and man in Trout Accuracy.   In 2018, at the World Championships in England, she earned two gold medals and one silver.

The Fly Fishers International Expo will also offer a bevy of activities for all the competitors during their time in Bozeman, MT.  From seminars, activities, demonstrations, authors and entertainment the Fair will serve as fun and educational opportunity for our participants to further their growth in the sport of fly fishing.

Join us in wishing all the veteran competitors the best of luck at the Finals!

Meet Captains for Clean Water, the non-profit that’s charting a new course for South Florida’s ecosystem—and the fisheries it supports 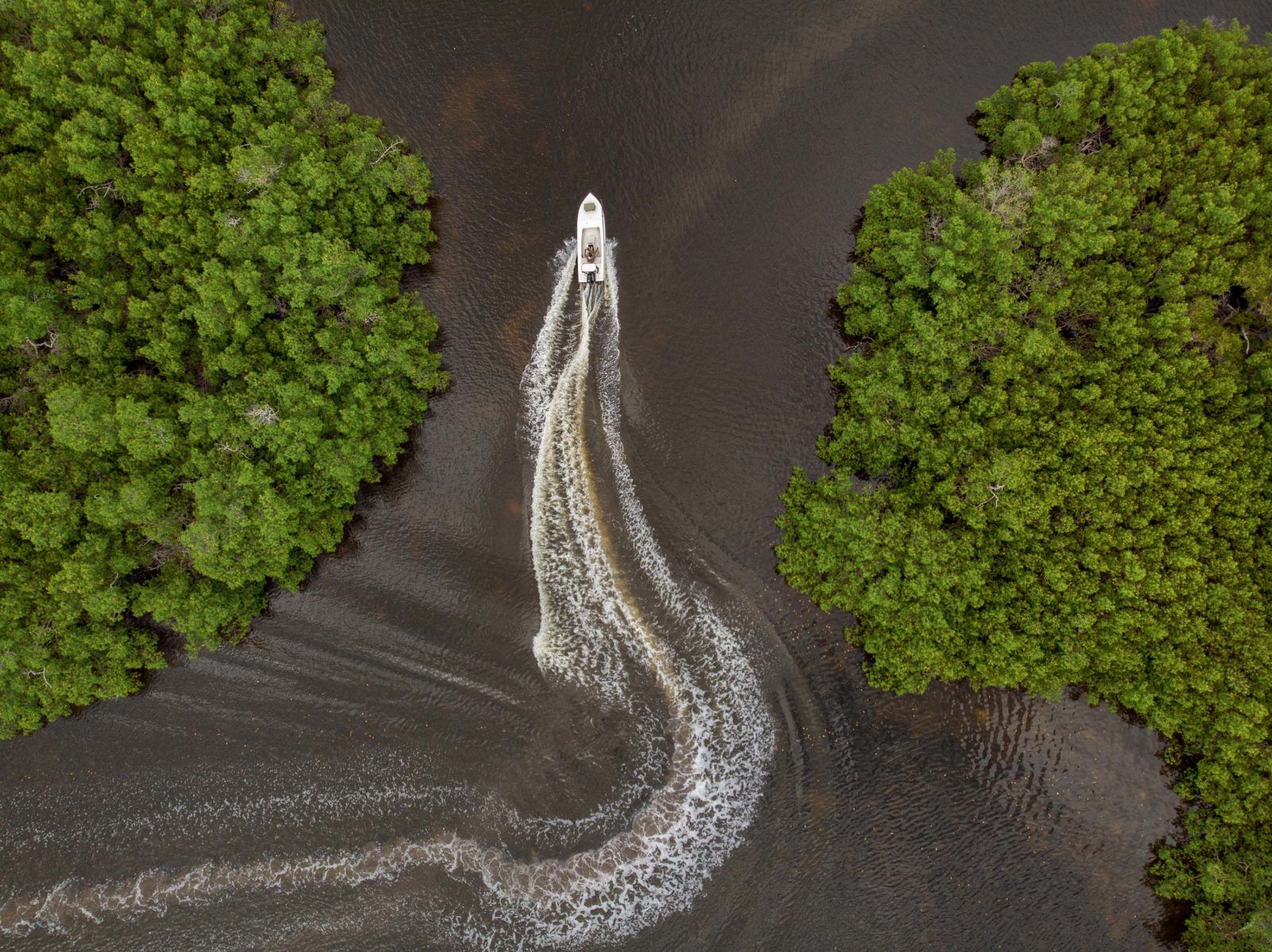 “This is what’s at risk,” Captain Chris Wittman tells me. “This is what we are fighting for.” He doesn’t need to point to what he’s referring to. Open waters and islands dense with mangroves unfurl in every direction. We’ve run a Hell’s Bay poling skiff through skinny water outside Everglades City, Florida, for a morning of hunting tarpon. This is primal country, without the blemish of a single human-built structure. Untouched, or so it seems.

Two years ago, Wittman, who lives in Fort Myers, would spend three days on the water for every one on land, guiding anglers to tarpon, permit, and redfish along the Gulf of Mexico. He still watches plenty of sunrises from a poling platform, but these days he finds himself under fluorescent lighting more than he’d like: on the phone, in meetings, in legislative offices in Tallahassee and Washington, D.C.

As a founding director of Captains for Clean Water, a nonprofit that advocates for the restoration of Florida’s estuaries and the Everglades, Wittman is helping channel into action a rising tide of anger over the state’s catastrophic water pollution. He and another Fort Myers charter captain, Daniel Andrews, formed the group in February 2016, after contaminated water from Lake Okeechobee flowed into the Caloosahatchee River and then into the fish-rich estuary where they have guided for decades. The toxic sludge wiped out grass beds and oyster reefs. Fish and horse conchs fled the contamination to die on white-sand beaches. The stench drove tourists out of their hotels. Fishing bookings, Wittman said, fell by 80 percent. 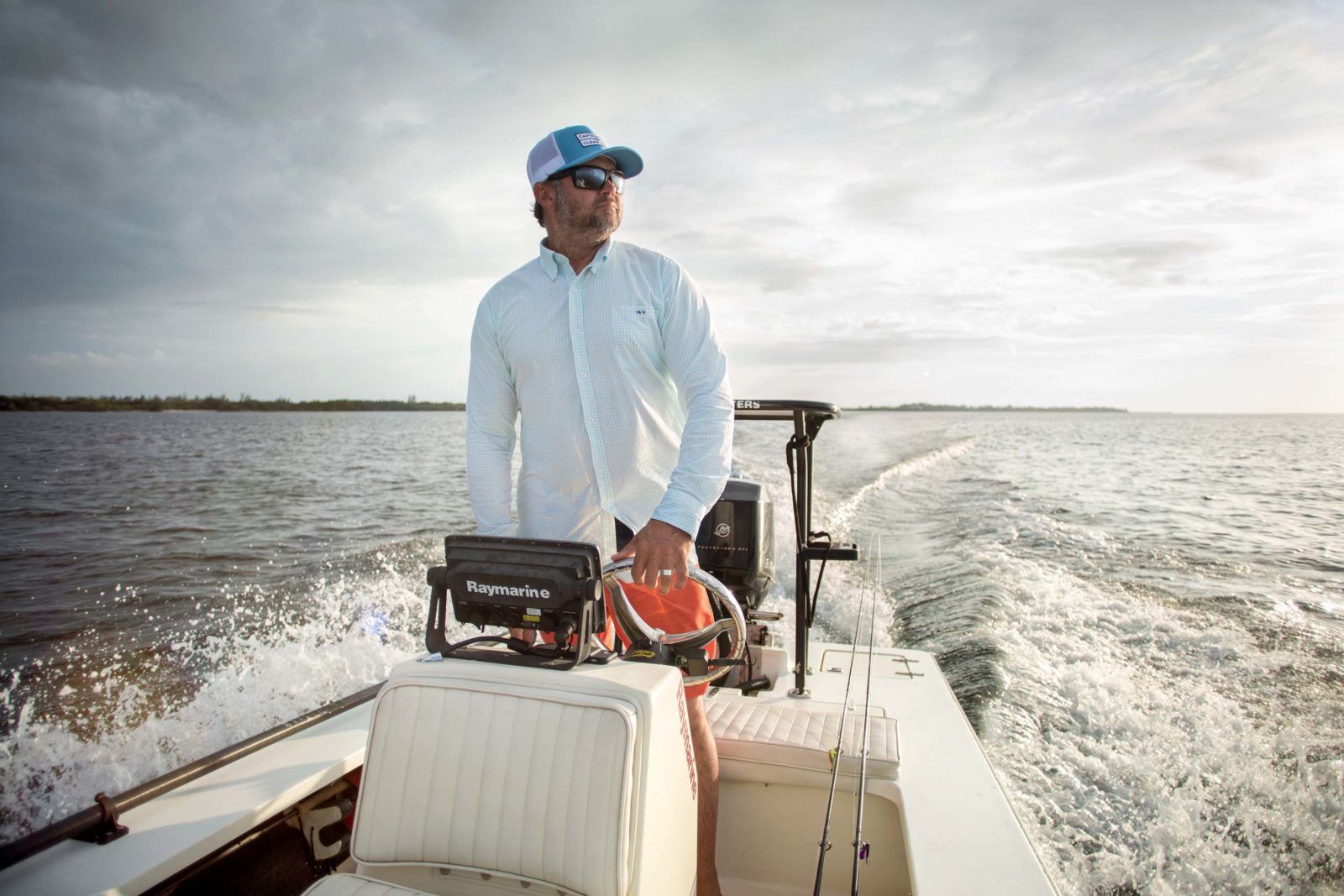 Captains in the area had seen this before. Florida’s waterways have been re-plumbed over the last century, and water no longer flows where nature intended. Instead of filtering slowly from Okeechobee through the Everglades, water polluted by municipal and agricultural sources shunts from the lake through a system of locks and canals into the St. Lucie River on the east coast and the Caloosahatchee to the west.

Wet years had brought high flows of tainted freshwater, but
the winter deluge in 2016 was the worst ever. “The straw that broke the camel’s back,” Andrews says. The two captains coined a name for their grassroots effort, put up a Facebook page calling for a meeting at the Fort Myers Bass Pro Shops, and wondered if they could get a few dozen irate captains to show.

They did—along with about three hundred others. “The crowd was out the door,” Wittman recalls, and included saltwater and freshwater fishing guides and anglers, commercial fishermen, tackle-shop owners, and journalists. “We realized we had a chance to do something to fix this. To influence our policy makers.” 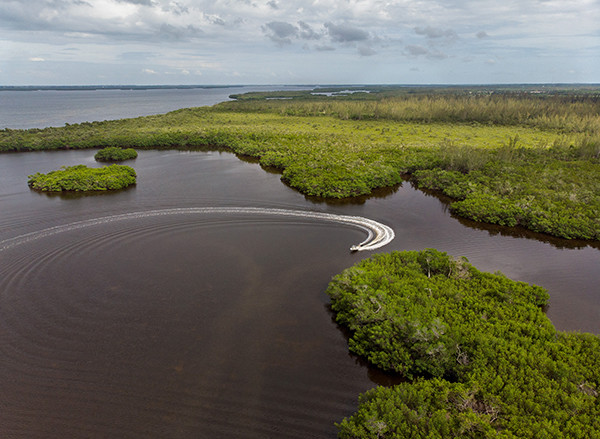 Fixing the Everglades has been a rallying cry since the invention of orange juice, but there is hope that a window of opportunity has opened. After years of study, plans are now under way to build a 17,000-acre, $1.6 billion reservoir ringed with massive constructed wetlands south of Lake Okeechobee. The lake will capture and hold polluted runoff, filter it through the marshes, and release it slowly south into the Everglades, which have been cut off from adequate water flows for decades.

The Everglades Agricultural Area Storage Reservoir, as it is known, was originally proposed as a 60,000-acre project, and some worry that the current design won’t be large enough to result in the “optimal” benefit that the authorizing legislation requires. “But it’s a big step forward,” says Thomas Van Lent, director of science and policy for the Everglades Foundation. “If it doesn’t provide the promised water quality, the state is on the hook to fix it.” After Congress green-lights Florida’s plan, it also has to come up with $800 million in matching funding. Van Lent is optimistic the needed legislation will pass this session, and that construction will begin soon after.

For now, the captains—and the more than 2,500 other members of Captains for Clean Water—are applying pressure to state legislators, federal officials, and anyone who will listen about the chance to do something meaningful for South Florida’s ecosystem, and the famed fisheries it supports.

“The Everglades are dying. I’ve heard that since I was a kid,” Wittman says. “And there are quite a few places where this effort can still fall off the tracks. But this is the best chance we’ve had for significant conservation of the ’Glades in my lifetime. We can’t squander this opportunity.”